Monster Energy’s Daniel Cormier retains the heavy weight title with what proved to be a dominant win after a second round TKO over challenger Volkan Oezdemir at the UFC 220 pay-per-view (PPV) co-main event inside the TD Garden in Boston, Massachusetts.

Monster Energy’s Daniel Cormier retains the heavy weight title with what proved to be a dominant win after a second round TKO over challenger Volkan Oezdemir at the UFC 220 pay-per-view (PPV) co-main event inside the TD Garden in Boston, Massachusetts.

For Cormier this fight was a significant win since he lost the belt to Jon Jones this past July even though he was given back the title after Jones’ title was stripped for a drug test failure and ruled as a “No Contest.”

“As I came into this fight, I felt as though I was fighting for a vacant title again because Jones beat me last time,” said Cormier. I fought for a vacant title and I got the job done, so I’m the UFC champion again. I’ve proved I’m worthy of being called champion.”

In the first round Oezdemir came out swinging and swarmed DC, using his length and reach to land multiple hard left haymaker’s, even pushing Cormier against the Octagon and landing a flurry of strikes. In typical fashion Cormier weathered the storm, absorbed the abuse, and closed the distance, changing the complexion of the second half of the round entirely. Cormier’s grappling, pummeling and dirty boxing took over as he manhandled Oezdemir, secured a take down, swiftly took his back and got ahold of his foe’s neck just before he was saved by the bell as the first round ended.

In round 2 Cormier, 38, got his jab working and was in complete control as he walked down his opponent then scored a takedown with ease, gaining full mount before transitioning into the crucifix position where he landed undefended head strikes until the referee was forced to put an end to the ground and pound.

Not sure what’s next for Cormier inside the Octagon since Jones faces a possible four-year suspension from the sport – perhaps a rematch with Alexander Gustafsson?

Based in Corona, California, Monster Energy is the leading marketer and distributor of energy drinks and alternative beverages. Refusing to acknowledge the traditional, Monster Energy supports the scene and sport. Whether motocross, off-road, NASCAR, MMA, BMX, surf, snowboard, ski, skateboard, or the rock and roll lifestyle, Monster Energy is a brand that believes in authenticity and the core of what its sports, athletes and musicians represent. More than a drink, it’s the way of life lived by athletes, sports, bands, believers and fans. See more about Monster Energy including all of its drinks at http://www.monsterenergy.com. 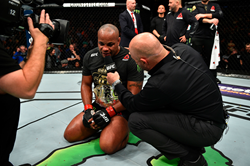 Note: We are not responsible for typo error, price change, substitute item, or available of item from online ads.