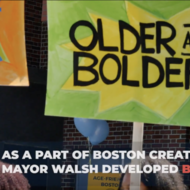 PUBLISHED BY: ARTS AND CULTURE

Since the creation of the Boston AIR program in 2017, the City has had a total of 20 artists-in-residence.

Mayor Martin J. Walsh and the Mayor’s Office of Arts and Culture announced that applications are now open for the fourth round of Boston AIR, the City of Boston’s artist residency program. Through this program, a cohort of artists will collaborate with the City of Boston to explore, analyze, and re-imagine City initiatives at the intersection of civil service, social justice, and artistic practice.

“Artists-in-Residence implement projects that imagine and test new approaches to City of Boston policies, processes, and procedures with the help of various City departments,” said Mayor Walsh. “This, in turn, helps to create a stronger and more equitable city.”

Since the creation of the Boston AIR program in 2017, the City has had a total of 20 artists-in-residence. Previous years focused on examining City policies with a lens of resilience and racial equity, valuing proximity to people by pursuing an understanding of the impact of local government policy in the lived experience of Bostonians, and supporting collaborative and democratic creation of City policy, processes and practices.

“As a writer, Boston AIR opened many doors for me. The opportunity to collaborate with other talented artists made me feel a sense of connectedness to other artists in Boston,” said former Boston artist-in-residence Nakia Hill. “Boston AIR provided the resources for me to publish my first book of poetry Water Carrier and an intergenerational anthology I Still Did It. Now, that publication is available in Boston Public Library branches across the City — my city.”

Examples of past artists-in-residence include Karen Young, a Japanese taiko drummer who collaborated with the Age Strong Commission and worked with women at the Grove Hall Senior Center to form “Older and Bolder,” an elder voice project that advocated for a safer crosswalk outside of the center. Another former artist-in-residence, Rashin Fahandej, collaborated with the Office of Returning Citizens and individuals ages 5-19 at the Blackstone Community Center in the South End to develop A Father’s Lullaby, a multi-platform, co-creative project that highlights the role of men in raising children and their absence due to racial disparities in the criminal justice system in the United States.

The following City of Boston departments are partnering on this round of Boston AIR:

Experienced artists ages 18 and over who work in all media are encouraged to apply. Each artist will receive a $30,000 stipend and up to $10,000 for project materials.

Building off of Mayor Walsh’s record-breaking investment in Boston’s arts sector, the City of Boston is investing $250,000 for the artist residency program, as well as an additional $200,000 FY20 investment in sustaining key grantmaking programs for individual artists.

The deadline to apply is January 22, 2020 at 5 p.m. Interested artists can apply online. You can also view the summary video online.