Beating Trump is most important factor; uncertain impact from Iowa results
West Long Branch, NJ – Bernie Sanders has taken the lead in New Hampshire’s presidential primary, while Pete Buttigieg and Joe Biden currently jockey for second place. Elizabeth Warren and Amy Klobuchar round out the top five in the final Monmouth University Poll of the 2020 Granite State primary. The Iowa caucuses have not helped narrow the field, but the outcome there could eventually have an impact among voters looking for the best candidate to take on President Donald Trump in November. Based on the poll results, this could help Buttigieg and hurt Biden. Sanders, on the other hand, seems to have a firm grip on voters who prioritize issues over electability.
Among registered New Hampshire Democrats and unaffiliated voters who are likely to participate in the February 2020 Democratic primary, the race currently stands at 24% for Sanders, 20% for Buttigieg, 17% for Biden, 13% for Warren, and 9% for Klobuchar. Others registering support include Tulsi Gabbard (4%), Andrew Yang (4%), and Tom Steyer (3%). Michael Bennet and Deval Patrick earn 1% or less. Another 5% of likely primary voters remain undecided and do not lean toward any candidate choice at this time. [Note: Mike Bloomberg will not appear on the New Hampshire ballot and is not included in this poll.]
There have been some clear trends in support since the fall. Sanders has experienced steady growth (from 12% in September and 18% in January). Buttigieg is holding steady from last month (20%) but up from the fall (10%). Two former polling leaders have seen their support slip – Biden from 25% in September and 19% in January, and Warren from 27% in September and 15% in January. Klobuchar’s support has crept up from 2% in September and 6% in January.

Sanders gets his strongest support from voters under 50 years old (34%), self-described liberals (31%), and voters without a college degree (30%). He is also polling better among men (32%) than women (17%). Buttigieg is drawing more support from women (24%) than men (14%) while Biden draws similar support among both men (17%) and women (16%).
“Many voters in New Hampshire remain open to switching their support. The muddle out of Iowa hasn’t narrowed the field, but there are some hints in the poll that Buttigieg could be helped and Biden hurt as the caucus results start to sink in,” said Patrick Murray, director of the independent Monmouth University Polling Institute.
Only half (49%) of New Hampshire primary voters are firmly set on their candidate choice. The poll finds that 78% of primary voters say the Iowa caucus results didn’t change their thinking about which candidate to back. Another 15% said Iowa made them take a second look at their candidate choice, but only 3% report actually changing their vote intention because of it. About 1 in 4 (24%) say they feel more confident about their candidate choice because of the Iowa results and just 8% say they are less confident. Biden is the only candidate with a significant number of supporters who are now less confident in their choice (20%). Buttigieg is, by far, the candidate whose supporters are likely to say the Iowa outcome makes them feel more confident about their choice (56%).
“Confidence is contagious and voters want to go with a winner. This race remains fluid because voters are looking for the strongest candidate to take on Donald Trump. One question to ask is whether Biden supporters will start to have second thoughts. This might not happen until the final days, because the Iowa results were still trickling in as we wrapped up the poll,” said Murray.
A majority of New Hampshire primary voters (55%) say that beating Trump is a more important factor in their vote than any policy issue they are concerned with. Another 29% say beating Trump is about as important as their top policy concern and just 15% say electability is less important than policy issues. Supporters of Biden (75%) and Klobuchar (67%) are the most likely to say that beating Trump surpasses any policy considerations, while Sanders backers (38%) are the least likely to feel this way. Supporters of Buttigieg (59%) and Warren (60%) are on par with overall voter sentiment on this factor, while backers of candidates who are not polling in the top five (40%) are more like Sanders supporters in being less likely to prioritize Trump’s defeat as a more important factor in their candidate choice.
“Sanders voters hone in on his policy platform as the decisive factor in their support. Biden voters are focused almost exclusively on beating Trump. Buttigieg seems to have an appeal for both types of voters. This may help him in the final days of this contest, especially if New Hampshire Democrats perceive the field to be narrowing,” said Murray.
With the campaign still in flux, Monmouth examined the race under a number of different scenarios. Likely Democrats were asked how they would vote if the field was winnowed down. In a race restricted to the top five polling candidates, hypothetical support stands at 27% Sanders, 22% Buttigieg, 17% Biden, 13% Warren, and 13% Klobuchar. Take Klobuchar out of this picture and the race tightens to 28% Sanders, 28% Buttigieg, 19% Biden, and 16% Warren.
Monmouth analysts also ran a variety of likely voter models on the full list of candidates in addition to the benchmark results reported in this release. A model that increases the share of low propensity voters shows Sanders in front with 25%, Buttigieg at 19%, Biden at 16%, Warren at 12%, Klobuchar at 8%, Yang at 5%, and Gabbard and Steyer at 4% each. A model that gives more weight to traditional primary voters shows Sanders with 22%, Buttigieg at 21%, Biden at 18%, Warren at 15%, Klobuchar at 10%, Gabbard at 3%, and Steyer and Yang at 2% each.
“Sanders maintains his lead in all our models. The potential for change in this race seems to be as much about persuading voters to switch horses as it is about absolute turnout,” said Murray.
The Monmouth University Poll also asked Democratic primary voters if the Trump impeachment trial impacted their candidate choice. Fully 91% say that it didn’t change their thinking at all, while just 7% say it made them take a second look at their candidate choice (although only 1% report actually changing their vote intention because of it). Overall, 19% say that the impeachment trial made them feel more confident in their choice and just 3% feel less confident. There are no significant differences in this opinion based on which candidate voters support.
The Monmouth University Poll was conducted by telephone from February 3 to 5, 2020 with 503 New Hampshire voters who are likely to vote in the Democratic presidential primary on February 11, 2020, out of 777 registered voters that were contacted for the poll. [Note: 130 of the 503 likely voter interviewers were conducted before the first results from the Iowa caucuses were released.] The question results in this release have a margin of error of +/- 4.4 percentage points. The poll was conducted by the Monmouth University Polling Institute in West Long Branch, NJ. 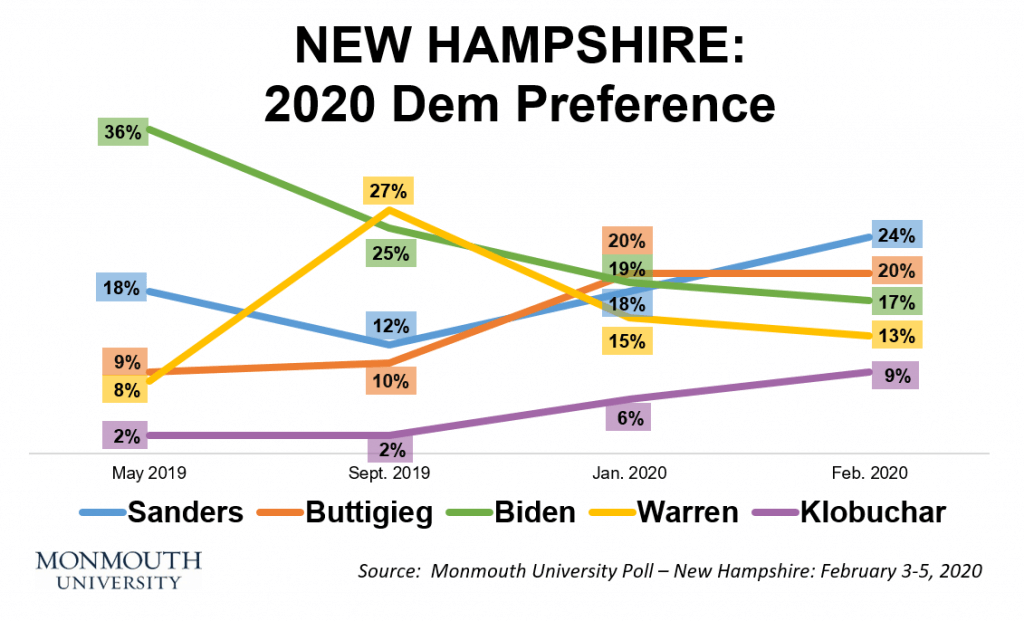