The public is invited to view rare, original documents at The Ephemera Fair including highlights from the unique Alexander Hamilton Collection, George Washington’s clarion call to give “to Bigotry no Sanction,” Lincoln’s Emancipation Proclamation, and more. On exhibit, valued at over $8 million, National Emergencies and Historic Documents that Shaped America. Ephemera/39 will be held at the Hyatt Regency Hotel in Old Greenwich, CT. In conjunction with Fair, The Ephemera Society is presenting a one-day conference on Friday, March 15th with the theme “Coming to America: The Immigrant Experience” and will feature eight speakers that will discuss this theme and tell stories through the use of ephemera. More information on the conference can be found at http://ephemerasociety.org/39.html.

Ephemera/39 (http://www.ephemerafair.com) sponsored by The Ephemera Society of America, will provide a rare close look at original historic documents that are at the core of much of today’s heated debates. ‘Ephemera’ refers to paper items such as posters, broadsides, letters, maps, magazines, photographs and other items that were meant to be used. Though not created to be preserved, many types of ephemera have since become collectible. Exhibitors from 12 states will showcase approximately 10,000 items covering hundreds of years of human history from every part of the globe.

Ephemera/39 will be held at the Hyatt Regency Hotel at 1800 East Putnam Avenue in Old Greenwich, CT on Saturday, March 16th (10 – 5) through Sunday, March 17th (11 – 4). Parking is free. Tickets are $15 for adults. Students with college ID and children under 18 are free with an adult admission. Discounted tickets are available at http://www.ephemerafair.com . In conjunction with Fair, The Ephemera Society is presenting a one-day conference on Friday, March 15th. The theme is “Coming to America: The Immigrant Experience” and will feature eight speakers that will discuss this theme and tell stories through the use of ephemera. More information on the conference can be found at http://ephemerasociety.org/39.html.

According to Marvin Getman, the show’s organizer, “even professed ‘non-collectors’ often leave with at least one item that catches their interest. It could be a $20 photograph from a century ago, or this time it could be a multi-million-dollar collection that seeds the next
great history museum.”

Special Exhibit – a room of museum quality treasures with an overriding theme, National Emergencies and Historic Documents that Shaped America.

The exhibit is provided by Seth Kaller, Inc., of White Plains, NY, and University Archives of Westport, CT. Seth Kaller is a leading expert in Documents of Freedom. Kaller was motivated to pull together this exhibit due to his belief that “we must be better informed by the lessons of the past in order to secure a better future. Founding documents, letters of presidents and leaders and followers, newspapers that capture unfolding events – this is all primary evidence of what America was, is and should become.” Kaller has spent a lifetime building collections for individuals and institutions focused on important American documents and artifacts. More information can be found at http://www.sethkaller.com. University Archives is Connecticut’s leading Dealer and Auctioneer of Historical Documents and Relics and more information can be found at http://www.universityarchives.com.

Not Everything is Political: Popular items for sale include vintage advertising materials, rare maps, posters, tickets, manuscripts and music scores, movie scripts, photographs, and much more. The Ephemera Fair is the highest quality show of its type in the country.
Stated Getman, “Walking through this fair is stroll through history. Even people who have never heard the word ephemera will love this event. Visitors will see how people lived long before smartphones and computers shaped how we define friends, correspondence, and communication.”

Of the 10,000 items, only five at the fair are for exhibit only (not for sale), including The Declaration of Independence – Very Rare New York Imprint, July 11, 1776.

The New-York Journal; Or, The General Advertiser, also reporting on New Yorkers celebrating
by pulling down the statue of King George III, which was then melted to create bullets.

To Bigotry No Sanction: Washington’s Famous Invocation of Religious Freedom

“Happily the Government of the United States, which gives to bigotry no sanction, to persecution no assistance, requires only that they who live under its protection should demean themselves as good citizens in giving it on all occasions their effectual support.”

Washington’s response to the Jewish Congregation of Newport, R.I., printed in New York (the new nation’s first capital) in the Gazette of the United States, Sept. 15, 1790. Exhibit only.

The ‘priceless’ highlights below are all offered for sale at the fair:

John Hancock’s Signed Protest Against Taxation Without Representation
Boston’s 1768 call to all of Massachusetts for help responding to British sanctions. Priced at $175,000.
Other Revolutionary War ephemera are priced under $200.
Alexander Hamilton Love Letter to Eliza Schuyler

“You…have bewitched me, for you have made me disrelish everything that used to please me, and have rendered me as restless and unsatisfied with all about me as if I was the inhabitant of another world… though it is the pride of my heart to love you it is the torment of it to love you so much… I would go on, but the General [Washington] summons me to ride…”

This revealing 1780 letter is offered only as part of the Alexander Hamilton Collection. With over 1,000 documents that capture in depth the story of the American Revolution and Founding, the Collection is priced at $2.6 million. See: http://www.AHamilton.com

George Washington Confiding his Dream of Leaving the Army to Dr. James McHenry

“I was in pain…resolving (like a man in the last agony) not to follow the trade & occupation of a G—- any more…. Do not my dear Doctor tease your Mistress in this manner – much less your Wife, when you get one.”

Despite the cryptic tongue-in-cheek tone, the real topic of this 1782 letter was serious – funding and maintaining troop levels to discourage the British from continuing the war. Priced at $120,000.

Other ephemera at the fair covers Washington’s evolution from a young officer whose first military expedition ended in surrender to the icon who defined “Executive Time.”

The U.S. Constitution – Rare First Day Printing
“WE, the People of the United States, in order to form a more perfect union, establish justice, insure domestic tranquility, provide for the common defence, promote the general welfare, and secure the blessings of liberty to ourselves and our posterity…”

The Independent Gazetteer, or, the Chronicle of Freedom was the only anti-Federalist paper to publish the Constitution on Sept. 19, 1787, the day it was released to the public. This rare Philadelphia newspaper is offered as part of a run of 358 hot off the press issues from Oct. 1786 to Dec. 1787, covering debates over fixing the flaws of the Articles of Confederation to the start of ratification. Priced at $325,000. An 1805 printing of the Constitution is priced at $295.

George Washington’s Manifesto for American Leadership – Collection Featuring Three Leaves
from His Own Draft of His First Inaugural Address
“Let a supreme regard for equal justice & the inherent rights of the citizens be visible in all your proceedings”
“Shall I arrogantly pronounce that whosoever differs from me, must … be influenced by some nefarious design? The mind is so formed in different persons as to contemplate the same object in different points of view.”
“The preliminary observation that a free government ought to be built on the information and virtue of the people will here find its proper place. Happily our Citizens are remarkably instructed by education…& ingenious for making improvements…”

Autograph Manuscript, ca. January 1789, six pages and additional fragments from his own draft of his undelivered inaugural address, plus rare inaugural buttons and sash. A unique collection, for $1.75 million.

Honoring Washington and Quoting His Farewell Address
“Reviewing the incidents of my administration, I am unconscious of intentional error, I am nevertheless too sensible of my defects not to think it probable that I may have committed many errors….” Glazed cotton textile, ca. 1806 priced at $1,750.

John Adams, Thomas Jefferson & James Madison: Defending American Sovereignty Through the War of 1812.
“We have admitted them to all the Rights and Privileges of American Citizens, and by this admission have contracted with them, to Support and defend them in the Enjoyment of all Such Rights. Our Laws acknowledge no divine Right of Kings…. These Remnants of Feudal Tyranny, and Ecclesiastical Superstition, have been long Since exploded in America….”

Adams’ incredible 16-page 1809 letter to the Speaker of the House is offered as part of another unique collection priced at $380,000 and exhibited here for the first time.
BostonRareMaps.com will be offering related prints, including an early print of the original Gerrymander cartoon, and biting responses to the British burning of Washington, D.C.

Abraham Lincoln Long on Politics and Short on Love to Mary Owens, his First Fiancée
“The opposition men… smile as complacently at the angry snarls of the contending Van Buren candidates… as the Christian does at Satan’s rage… other things…have gotten my spirits so low, that I feel that I would rather be any place in the world than here….This letter is so dry and stupid that I am ashamed to send it, but with my present feelings I can not do any better…”

Lincoln may have revealed more than he intended. Well after they broke their engagement, Owens lamented his deficiencies “in those little links which make up the chain of a woman’s happiness.” Autograph Letter Signed, Dec. 13, 1836. Priced at $375,000.

The Emancipation Proclamation, the Gettysburg Address, Civil War battle reports – as reported at the time in original historic newspapers, with many priced below $250.

Alice Stone Blackwell – Signed Stock Certificate for The Woman’s Journal. Priced at $1,750
Einstein Counsels His Son on the Meaning of Life

“All my life I have troubled myself with problems and am always – as on the first day – inspired by the fact that cognition in the scientific and artistic sense is the best thing we possess… If one hears the angels singing a couple of times during one’s life, one can give the world something….”

Einstein ephemera, including photographs, prints, books, and other letters, also on sale.

Editors: High resolution digital images available upon request as well as additional information on any of the items noted. 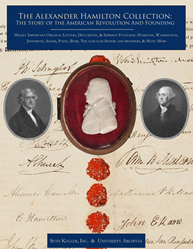